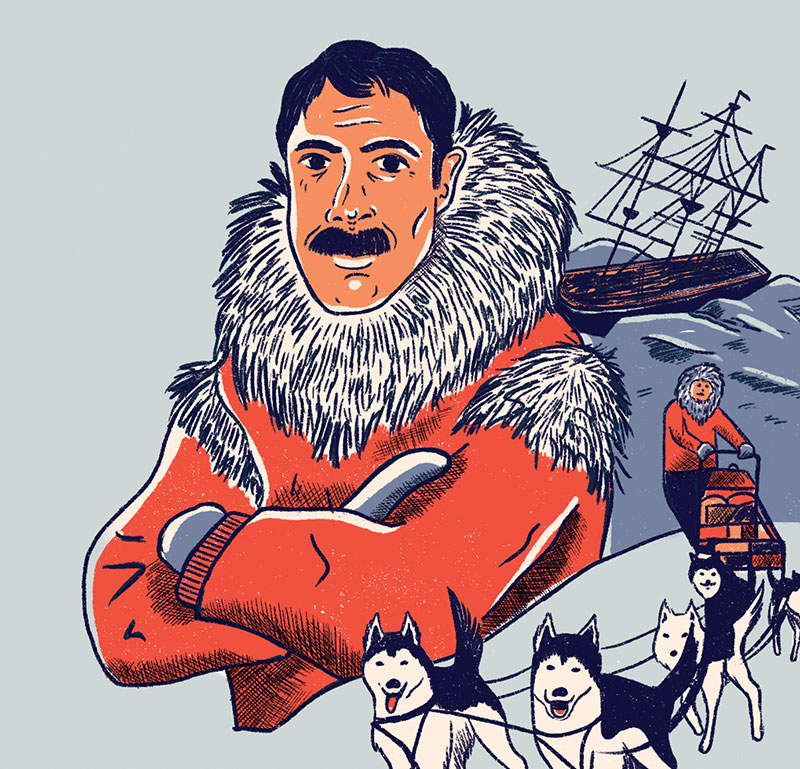 a beat-up old whaling ship called the Karluk was taking the men of the Canadian Arctic Expedition north of Alaska. They were in search of an undiscovered continent and things were going just swell—that is, until their ship became trapped in an ice floe and their leader abandoned them.
The Karluk drifted for months, traveling hundreds of miles farther north. When it became clear that no rescue was coming, Captain Robert Bartlett—who became the de facto head of the expedition after their former leader went out for a pack of cigarettes and never came home—knew their fates rested on his shoulders. So he and his Inuit companion Kataktovik traveled over 700 miles through Siberia to reach civilization.
Told in a casual tone with splashes of modern humor, HISTORY, FUCK YEAH: Canadian Arctic Wreckspedition is a true story of hilarious incompetence and spectacular triumph.

Available in Kindle, Paperback, or Audiobook:

Get all 3 formats on historyfuckyeah.com
Amazon Kindle / Paperback
Audible Audiobook

What is
HISTORY, FUCK YEAH?

While maintaining a strict adherence to historical accuracy, each book in the HISTORY, F*CK YEAH series reads like a story—complete with splashes of humorous dialogue and modern quips of sarcasm.

THE YEAR WAS 1913 and white people were pretty bored. The United States had settled sea to shining sea, Britain had dipped its dong in pretty much every populated crevice on earth, and Australians were pretty sure you could train a sheep to do just about anything. So, with nothing better to do, they started filling in blank spaces on their maps. Namely the Amazon, central Africa, and the northern and southern ice caps.

Governments and scientific institutions were happy to fund expeditions into the unknown, and explorers were the celebrities of the day. Since the mid-1800s, newspapers had been peppered with their names for weeks or months or years with readers hanging on every word. Where Is Livingstone? headlines blared when the British explorer had gone missing in Africa in 1871. Oh, There He Is, they reported when Henry Morton Stanley found him deep in the interior. 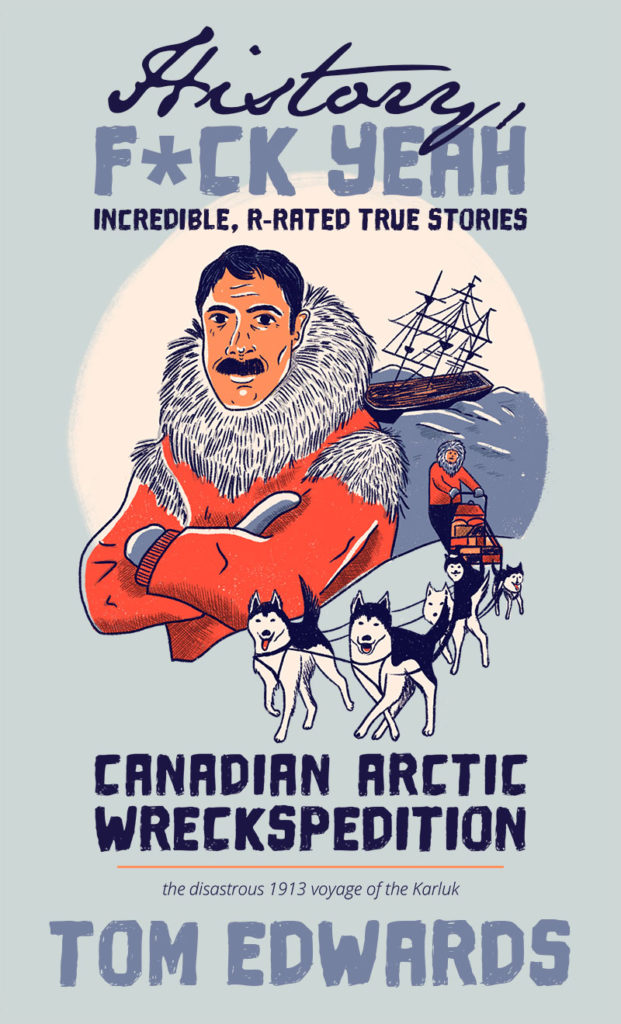 Pretty much the Fyre Festival of arctic exploration.

THE YEAR WAS 1913 and white people were pretty bored. The United States had settled sea to shining sea, Britain had dipped its dong in pretty much every populated crevice on earth, and Australians were pretty sure you could train a sheep to do just about anything. So, with nothing better to do, they started filling in blank spaces on their maps. Namely the Amazon, central Africa, and the northern and southern ice caps.

Governments and scientific institutions were happy to fund expeditions into the unknown (you’d be hard-pressed to find a better PR campaign in those days), and explorers were the celebrities of the day. Since the mid-1800s, newspapers had been peppered with their names for weeks or months or years with readers hanging on every word. Where Is Livingstone? headlines blared when the British explorer had gone missing in Africa in 1871. Oh, There He Is, they reported when Henry Morton Stanley found him deep in the interior. Amundsen Discovers Northwest Passage! they shouted in 1906, and Peary Reaches Pole! in 1909.

In decades past, if further reasoning had been required than “Hey, I’d like to go conquer [unnamed region] and take [gold, spices, slaves, etc.],” explorers would turn either to imperialism or religion: “I shall do it in the name of [insert deity]!” or, “I shall do it in the name of [insert king, country, or empire]!” These days—as the world was fresh out of untapped empires or unexplored continents—the typical guise for a glorious adventure into lands unknown was science. I think we can agree this approach was a lot more reasonable for all involved, and to be fair, I’m not insinuating that every explorer of the day was foaming at the mouth for glory and nothing else—nothing, in fact, could be further from the truth. These expeditions were, after all, comprised mainly of scientists and other academics who were enduring months or even years of immeasurable hardship in the name of their profession. When I allude to the contemporary equivalent of conquistadors I’m speaking, specifically, of a particular type of person—a person like Vilhjalmur Stefansson.

Stefansson went to the Canadian government and proposed the “Canadian Arctic Expedition”—in which he would receive significant funding to take a crew of geologists, anthropologists, meteorologists, and some other nerds; and drop them off at various points north of Alaska. Oh, and while he was there, he might poke around for undiscovered land and plant a Canadian flag or two. In all, it was proposed to be the most extensive scientific expedition into the Arctic to date.

The Canucks thought that sounded like a pretty fair deal (albeit not quite the same headline as North Pole Discovered!, South Pole Discovered!, or Maple Syrup on the Moon!). They gave him more than enough cash to secure a good ship and outfit her with ample supplies. Unfortunately, that’s precisely not what he did.

First, there was the matter of the ship he purchased—a whaling vessel named the Karluk. She was almost thirty years old, reportedly smelled like whale shit, and, oh, the thing was made out of wood. (Lest the reader forgets, this boat was expected to plow through thick layers of Arctic ice for months on end.) One of the crewmen described her engine as “nothing more than a coffee can.” But Stefansson got her for a steal, so that was that.

Second, there was the crew. Wanting to save money and time, Stefansson quickly scraped the dregs of Canada’s ports to find the men who would crew the Karluk. Among them were alcoholics, sailors who had provided fake names; and the ship’s cook, Templeton, was a shameless drug addict.

One of the few—if only—truly great decisions Stefansson made was hiring the right man to captain the Karluk. Robert Bartlett had already earned quite a reputation as an arctic mariner. He had captained Robert Peary’s ships on all of his expeditions to reach the North Pole—eventually taking the SS Roosevelt farther north than any vessel had gone before. Much of the passage was enclosed with ice, requiring Bartlett to carefully navigate through a constantly changing landscape of hazards each day. On their last expedition together—the one in which Peary finally [allegedly] reached the North Pole—Bartlett ventured ahead of Peary with a dogsled team to lay supplies along the trail. He didn’t join Peary on his final push for the Pole, however. Some believe this was due to a rivalry between the two of them. I think Peary took one look at those bowling balls ol’ Bobby Bartlett was dragging around in his pants and knew the sled wouldn’t hold.

Captain Bartlett took a gander at that sad pile of driftwood called the Karluk and told Stefansson he should send it to the nearest scrapyard. The ship’s engine would never have the strength to push them through the ice, and the wooden hull would likely crack apart like an eggshell once the polar ice closed around it and squeezed tight. It’s likely that whatever Buy Here, Pay Here lot Stefansson bought the thing from had a no-returns policy though, so Bartlett’s complaints fell on deaf ears.

Stefansson was too busy planning for his future celebrity status to worry about such things anyway. You see, the “largest scientific expedition in Arctic history” was nothing more than a sideshow to the Icelandic explorer. Unbeknownst to the men he led, his mind’s eye was fixed on an as-of-yet-undiscovered continent that lay beneath the polar ice cap [spoiler alert: that’s definitely not a thing]. He went to all the major media outlets and set up contacts to funnel his updates from the polar frontier to the front pages. To most of the crew, and to Bartlett, it felt as though their leader had one eye on the task at hand, and another stuck in the clouds.

If the rickety old ship and narcissistic leader weren’t enough to trouble him, Bartlett had more problems: the crewmen and the scientific staff hated each other. Bartlett was continually breaking up quarrels between the “worthless bloody scientists” and the “scroungy crewmen.” Remember, this was a group who was preparing to spend more than a year in close quarters. Bartlett worried, when push came to shove, that they wouldn’t be able  to count on each other to get the job done.

OVER THE WEEKS leading up to their departure, the crew began piling crates of supplies and equipment on the deck of the Karluk. And just as the men wondered if the ship would fall apart under the weight, Stefansson showed up with another ship.

“What?” Stefansson replied, “No, the Alaska is going to carry the Southern Party.”

“Well, the government said they’d give us more money if we expanded our scientific research a bit. So I figure we send the Alaska here along the shoreline while we look for the lost continen—for uhh, science stuff—while we look for science stuff up north. Plus we can take all this science nerd bullshit”—he waved his hand over the crates piled on the deck of the Karluk—“and toss it on the other boat.”

“But the scientists are on this boat,” Bartlett said. “How will they conduct their research if their equipment is on a different boat?

One of the crewmen spoke up, “Say, speaking of supplies and equipment and stuff, when are we supposed to get our cold weather clothing? My orders told me to ‘bring nothing,’ that ‘everything would be provided’ to me.”

“At the very least we need to take stock of our supplies and split them up in a way that makes sense,” Bartlett said.

“Yeah this seems dumb,” Templeton said, some drool spilling from his mouth as he leaned against a stack of wooden crates and placed a syringe into his little black case. “Also, hey, when are we getting our parkas and stuff? It’s gonna be cold up there. Right? Isn’t it s’posed to be real cold up there?”

Bartlett closed his eyes and rubbed his temples. “Goddammit.”

“You’re going to get your damned winter clothes!” Stefansson yelled. “Now, if you’ll excuse me, I have some uhh, important meetings. Get these boxes stacked on the other ship.”

Listen on Audible
Read on Kindle or Paperback